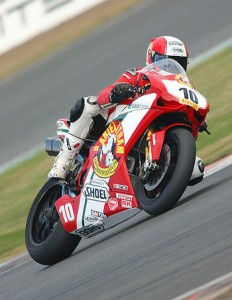 Following a creditable performance at the Isle of Man TT in June, Michael has now been lucky enough to test out and race all the major superbikes in one season – Honda, Kawasaki, Suzuki, Yamaha and Ducati.

But right at the top of his list is the Italian Ducati.  So, with local brewery sponsor Bathams, has formed Team Batham Ducati.

“We had a brilliant time at Silverstone and it was a joy to ride the Ducati as I have always been very successful on Ducatis” said Michael.

In fact, Ducatis are a family tradition as Michael’s famous dad, Tony Rutter of Wordsley, near Stourbridge, winner at  the TT on numerous occasions in the past, always favoured Ducati.  Indeed, Ducati’s superior engineering ensured championship domination way before others tried to catch up.

Team Batham Ducati will be riding at Darley Moor “ Stars of Darley” over the weekend of 3rd and 4th October, and then it is on to Oulton Park to race in the British Superbike Championships the following weekend, 9th, 10th and 11th October.

Team Sponsor Matthew Batham of Bathams Brewery said “It was thrilling to have such a talented rider flying the Batham’s colours at Silverstone and Team Batham Ducati is looking set for success”.

Michael added “It was a lot of hard work from everyone involved that put us on the grid, so I need to thank everyone, especially Bathams, for their support,  It was good to score a point first time out as it is so competitive out there, and now we can look forward to Oulton Park”.