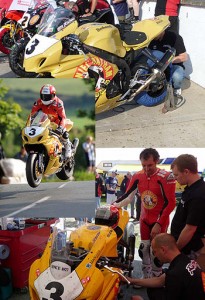 A major venture for Bathams this year is the sponsorship of local riding hero Michael Rutter at the TT races on the Isle of Man during June 2009.

A string of biking successes for Michael mean hopes are high – especially as dad Tony Rutter, himself a Manx TT legend having won 8 times, is a regular at Batham’s pub, The New Inn at Wordsley!

Michael was previously with the Yamaha team, but with Bathams behind him, has been able to go for glory in his own right this year.

In spite of a few last minute mechanical tweaks being needed, Michael ended up a terrific 7th in practice.

But the weather stepped in, and with torrential rain everywhere, all races over the weekend of 6th and 7th June were postponed.  So Michael’s first race – the Superbike TT Race – was on Monday 8th June.  A brilliant start found Michael lying 8th on Lap 4 (of 6), when not one but two pieces of bad luck struck!  He was hit by a large bird, making a big mess of both the bike and his leathers. Then suddenly his gear lever snapped – bringing his race to an untimely end.

“Everyone now has their fingers crossed for Michael’s race on Friday 12th June” said Matthew Batham, Director. “This is the Senior TT Race and we are pinning our hopes on Michael’s skills and experience for this race.”

12.6.09:  Once again, rain delayed the start of the Senior TT Race, but Michael was not deterred, coming in at a magnificent 7th place. “We are really proud of Michael – this is a major race and he has done extremely well” said Matt Batham.