After snapping up the 1931 Bean truck at auction in 2009 – see the news item ‘Bathams brings home historic lorry’ – Bathams have now had the Bean beautifully restored, and brought back to its former glory.

Although the Bean had previously led an exciting life of television appearances, it was later owned by British Rail in the 1980s and had remained a rather forlorn British Rail Brown until the transformation. 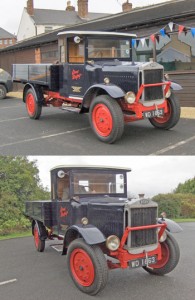 Acquiring and restoring the Bean truck marks a pivotal moment in Batham’s history: when Bathams had bought their very first lorry, a 1928 Bean, it propelled the company and its traditional beers instantly into the modern world, playing a major part in taking the business forward into the future.

Director Matthew Batham said: “It has been fascinating recreating a part of Batham’s long history, and transforming an old Bean into the beautiful vehicle it has become again.”

Furthermore, a ‘viewing garage’ has been especially created at The Lamp Tavern in Dudley, where the Bean can be viewed through the glass.

So, on 30th March 2010 at The Lamp, all those involved in bringing the Bean back to life gathered to celebrate its homecoming.

Press were invited and Central News were filming and interviewing – and the Bean was splashed on the 6pm Central News programme that very evening.

Among those attending were Directors Matthew and Tim Batham; Selwyn Sheppard of  S.W.Sheppard who did the amazing restoration; John Pawson of Bennetts, Dudley, who created the viewing garage, and Richard James of Bostin’ Bathams Tours, who will be taking the Bean to its future venues.