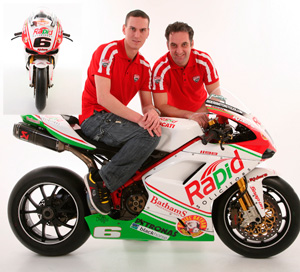 For the 2011 season, which starts over Easter at Brands hatch, Riders will have the upgraded Ducati 1198 Rs, and Ducati will be up-specing the 2011 bikes all year. Michael Rutter said “people are saying we’ve now got a factory Ducati, but it is not a factory bike….we haven’t got factory suspension”. Michael will be racing alongside Martin Jessop in the championships. Michael continued “…Martin and I have a chance of winning the title…”

The team are also preparing two extra Ducati 1198s to race at this year’s Isle of Man TT, and also at North West 200 and Macau GP.

Director Matt Batham said “A great season lies ahead for 2011, with a great rider and terrific bikes – we are proud to be sponsors again this year.”