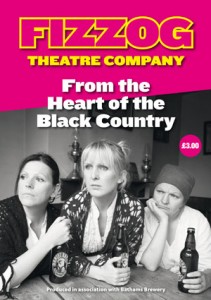 Bathams are pleased to announce their support for the Black Country group, Fizzog Theatre Company, who have developed a big audience following around the area with their live comedy shows and filmed Victorian drama episodes called “Black By Day”.

The Brewery have provide financial assistance for the production of a Fizzog brochure which is now on sale priced three pounds.

The Fizzogs are based at the Thorns Community College, Brierley Hill, and travel near and far presenting their comedy routines, most of which are based on Black Country characters. They also perform live street theatre at the Black Country Living Museum throughout the summer.

“Black By Day” has been developed over the last 12 months with two episodes of the comedy/drama and has been rapturously received by audiences around the Black Country. They are hoping to launch it nationwide with a full length feature eventually.

Further information on the Fizzogs can be obtained from their website http://www.fizzogtheatre.co.uk/ and for copies of their brochure and other merchandise please call 01902 897809.